Salary of Top 10 Actors in Kollywood:

Here is the unofficial list of Salary of Top 10 Actors in Kollywood: 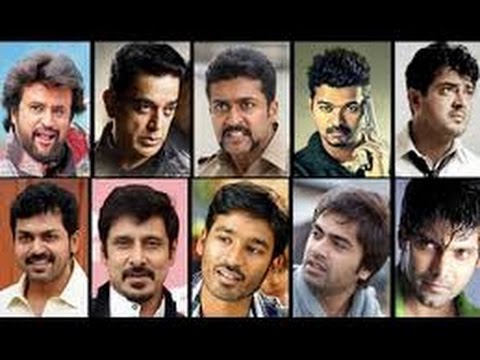 Sorted from lowest to highest . This is a rough estimate and can vary over periods.

Born on 3rd Feb, 1983, Simbu has been active in the Tamil film industry from 1984. Some of his notable films include Vinnaithaandi Varuvaaya, Manmadhan, Vallavan, etc. His salary is 8 crores.

This well-known actor was born on 16th Jan, 1978. He started his career in movies in 2004 and became a popular actor as years elapsed. Some of his famous films are Vikram Vedha, Soodhu Kavvum, Dharmadurai, etc. His salary is 12 crores.

17th Feb, 1985 is his birth date. Starting as a participant in reality shows, he moved on to do superhit movies from 2012. His blockbusters are Remo, Maan Karathe and Varuthpadadha Valibar Sangam. His salary is 15 crores.

He’s present in this industry from 2004 and he was born on 28th July, 1983. His popular films include Aadukalam, Pudhupettai, VIP, etc. His salary is a whopping 16 crores.

Popular for his versatility, Vikram was born on 17th April, 1966 and he's active in the industry from 1990. His blockbusters are I, Anniyan, Pithamagan, etc. He earns 20 crores.

Dubbed as Ulaganayagan, Kamal Hassan was born on 07th Nov, 1954. Starting as a child artiste in 1959, he has been active till the present. His blockbusters include Indian, Dasavatharam, Viswaroopam, etc. He earns 35 crores. His film carrier is expected to an end soon after Viswaroopam 2 and Indian 2

Known for his commercial blockbusters, Vijay has been acting from 1984. His birthday falls on 22nd June, 1974. Some of his blockbusters are Mersal, Kaththi, Theri, etc. His salary is 40 crores.

Born on 1st May, 1971, Ajith is well-known for his commercial potboilers. He has been active from 1990. His superhits include Mankatha, Vedalam, Vivegam, etc. He earns 45 crores.

Best known as Superstar, Rajnikanth was born on 12th Dec, 1950. He is a popular actor from 1975. Some of his recent blockbusters are Endhiran, Sivaji, Kabali, etc. His salary is a whopping 80 crores. (still top producers are looking for his dates) His film carrier is expected to an end soon after Kaala and 2.0 movie