T.Rajendar is known for his multi faced talents in Tamil cinema. from the lead hero to editing, music he does every possible work for his project which he even produces himself. He is known for giving Silver jubilee movies.
END_OF_DOCUMENT_TOKEN_TO_BE_REPLACED

END_OF_DOCUMENT_TOKEN_TO_BE_REPLACED

Top 3 Heroines Introduced in 2016 in Kollywood

Kollywood has seen lot of new faces in the year 2016 in variety of roles from hero, heroines, comedy actors and other roles. In this post lets see the top 3 heroines that were introduced in 2016. They are rated by kollywood.net team.

This Premam actress was introduced in Kollywood in the year 2016 in the Movie Kodi starring along with Dhanush. Though she is the second heroine along with Trisha Krishnan who has a meaty role in the movie, Anupama’s performance was widely appreciated and doesn’t look like her first movie. The movie had Dhanush as twins. Elder Dhanush (politician in the movie) has Trisha as the paid. Anupama Parameswaran paired with the younger Dhanush (college professor in the movie).  We can expect her in more roles and as a solo heroine in 2017

Introduced by Gautam Vasudev Menon in movie Acham Enbadhu Madamayada along with Simbhu aka STR. She was also the lead heroine in the Telugu version of the movie along with Naga Chaitanya. Her performance on both the versions was appreciated much by the critics and she has bagged couple of new movies as a result. One such new movie is her role along side Udayanidhi Stalin

The best introduced heroine in Tamil Cinema for the year 2016. She has the best role any new comer can imagine.

Her role in Irudhi Sutru (Salakadoos in Hindi) along with Madhavan was critically acclaimed and received well by the audience in all centers. She has put in enormous efforts for the movie and has reaped the rewards. Her next movie to be released is Sivalinga along with Raghava Lawrence. Let us wish Ritika Singh a great 2017

Venkat Prabhu has delivered a clean sixer with his Chennai 600028 II which is rocking at the box office as viewers are getting their money’s worth spending two and a half hours at the theatres. The film has grossed close to 7.5 Crores in the opening weekend in Tamil Nadu.

The Chennai box office has brought in 1.22 Crores, Coimbatore 1.6 Crores, Chengalpattu area 2.3 Crores and the rest from the other territories. The Yuvan Shankar Raja musical which has Jai, Mirchi Siva, Vijayalakshmi, Nithin Sathya, Premgi Amaran, Ajay Raj, Arvind Akash, Inigo Prabhakar and Vijay Vasanth among others in the cast is gaining huge by positive word of mouth and is expected to hold strongly through the next weekend also.

Kabali is the first south Indian movie to gross 100C+ world wide. It just crossed 2 weeks and it is expected to do nearly 20 C more overseas on its end run 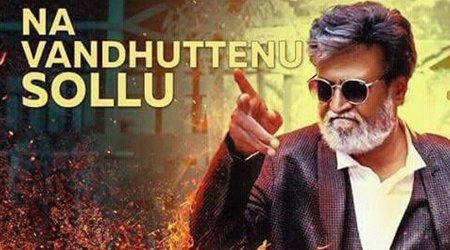