2 point 0 teaser confirmed to release on September 13th. The announcement came out shortly today after long wait from the fans on the teaser announcement news.

The posters were released confirming the teaser will be also be in 3D. Its still not clear if there will be a 2D version also along with the 3D version.

Director Shankar has tweeted this poster. It shows uber cool looks of Rajni in his both characters in blue and red shades. Akshay is seen in crowman avatar.

Akshay Kumar has tweeted the teaser announcement with this second new poster, there shows a big bird like monster animal, which could be the role or one of the roles played by Akshay Kumar.

North India and Hindi rights are acquired by famous director Karan Johar who has confirmed via this third poster.

The actor has promised to do a movie with Sri devi production company during their working in English Vinglish movie. But its now almost official his next movie after Viswasam is with director H Vinoth of Sathuranga vettai fame, and produced by Sri devi’s husband Boney Kapoor productions. Looks like Ajith has kept his promise he made to late actress Sri Devi.

This news broke out today as its Sri Devi’s birthday today.

We will wait for official announcement from Boney Kapoor production team.

Here in this below latest group photo, Ajith is seen with a team of Chef from a famous hotel in Hyderabad where he stayed recently

2 point 0 team has a new update. The Oscar award winner and 2 point 0 movie sound designer Resul Pookutty has completed the sound design and submitted the first draft to director Shankar and they both are seen in the group photo below with the sound design team.

Indian movie industry is eagerly waiting for the teaser of 2 point 0 to get a glimpse of the magnum opus. The buzz is the team is planning to release 2 point 0 teaser on August 15th Independence day.. But its not official yet , so lets wait fingers crossed

Vishwaroopam 2 is gearing for its release on August 10th 2018. Earlier Kolamaavu Kokila was also planned for August 10th but now its postponed to August 17th paving way for a solo release for Vishwaroopam 2 in all three major languages, Tamil, Hindi and Telugu.

November 2018 is going to have three much awaited movies. 2point0 is expected to release atlease 2 weeks after other two movies.

2point0 new poster with the release date given below.

Kalavani 2 first look poster is released today by the production house Varmans who is producing it..

Actor Vimal and Oviya starring Kalavai 2 , the sequel of the superhit Kalavani first part is one of the most expected movies of 2018.

After Bigg Boss 1 huge success and fan following Oviya is coming back to Kollywood with the much awaited sequel of her hit movie.

Movie is directed by Sargunam who directed the first part as well. Kalavani 2 is expected to release by end of July 2018

The movie also has Sathyaraj, Bhanupriya in important roles along with a huge list of supporting actors . Kadaikutty Singam is also having a simultaneous release in Telugu where Karthi has a good market just like Suriya, in the name Chinna Babu.

Sayyeshaa is looking bubly and is looking for getting a breakthru with this family entertainer..

First time the father-son combo is making it on the silver screen with the famous catch phrase from Karthik “Mr Chandramouli” from Mouna Ragam.

Karthik looks so fresh in this youthful movie and his chemistry with his son Gautham Karthik is looking excellent. The movie has Regina Cassandra as the female lead. Music by Sam C.S, the songs for the movie are all peppy and already received good reviews

Interesting new addition for the movie is another heroine, Varalakshmi Sarathkumar which was revealed in the recent press meet held yesterday

Much awaited Santhanam starring “Server Sundaram” movie has confirmed the release date of July 6th. The movie has seen so much of unexpected delays, producer council strike has also further delayed this movie which is supposed to get release end of last year 2017

Much awaited movie of 2018 , the superstar’s Kaala arrived today.

Since its world premier which happened first in Singapore (Indian time 7.30 pm on 6/6) it started getting majority of positive reviews from common people and reviewers

It released in India at 4 am where lot of special screenings happened in Chennai..

We have collected up to late reviews for the movie from movie buffs and professional reviewers and have listed them along with their twitter handles.

We will be updating this page all day today for more reviews from industry leading reviewers like Sreedhar pillai, Bharadwaj rangan etc

Note: we have NOT edited or even corrected a word in their reviewers we have verified the profiles and publishing the tweets AS IT IS

#Kaala works a powerful, rooted and relevant story that shines the spotlight on the oppressed and their fight for identity while resonating the same sentiments that powered the recent Jallikattu and Tuticorin protests. #Rajinikanth’s rage-filled performance is a joy to watch.

#Kaala does have its issues, especially in the second half where it turns quite predictable, only to redeem itself with that beautiful last scene. Oh, and I fell in love with Eswari Rao’s performance. Such a delightful screen presence.

Superstar scored a century after #Endhiran i believe.

#Kaala – 80/100 . A movie that will be celebrated and debated for years to come . You will fall in love with the acting of @rajinikanth . Must be watched with your family !!

#Kaala first half – Liking how @beemji handled the relationship between @rajinikanth – Eswari Rao and Superstar’s nostalgic romance with @humasqureshi. Intermission with Rajinikanth – Nana Patekar face off.

#Kaala – Felt that it’s far far better than #Kabali. @beemji has learnt his lesson and delivers a film which will appeal to majority of viewers, Superstar #Rajinikanth fans & also his core ‘arasiyal padam’ audience. And yes, he strongly forces his political ideology into the film

@Satyaasalmanfan
#Kaala
1st half 3.5*/5*
2nd half 3*/5*
Best Rajni movie this decade after enthiran
Masala movie at its best
PA Ranjith has done a fantastic job
Complete Mass
Go for it
You won’t be disappointed

@cinemapettai
#Kaala – Felt that it’s far far better than #Kabali. @beemji has learnt his lesson and delivers a film which will appeal to majority of viewers, Superstar #Rajinikanth fans & also his core ‘arasiyal padam’ audience. And yes, he strongly forces his political ideology into the film

@maghizhann
One again its proved for #Kaala

@cinemapettai
#Kaala [3.25/5] : A fight between oppressed vs Land mafia in #Mumbai ‘s #Dharavi

His mannerisms, dialogue delivery and action 👏👏

@maverix111
Second half had some really good scenes until a certain point ..the confrontations and all were nice which could have led to a good showdown but the pre-climax and climax scenes make it a total dud..senseless…maybe a feast for his fans but difficult to like it ..#Kaala

Rajnikanth attended and spoke in the press event attended by leading Telugu producers and distributors.

For Kabali he did not make it to the event as he was in USA at that time, so this event should gain lot of traction for the movie Kaala whose promotion was considered to be not much for a superstar film.

Telugu producers/distributors were not very happy until superstar himself made it to the event yesterday which changed the moods.

Kaala in Telugu was sold to very experienced distributors who will be releasing directly to the theatres without middle man or selling smaller areas. So we expect Kaala to do very well in Telugu states than Kabali.

All these were due to recent tragic events in Tamilnadu and Dhanush has pulled a wonderful production team from Wunderbar and insiders also report the production company has agreed on “share basis” in many leading areas in Tamilnadu like Coimbatore instead of “minimum guarantee” basis which is considered risky.

Wunderbar and Dhanush also associated with leading brands like Cadbury, Amazon etc for sponsorship which should offset the high budget of the movie.

Today Sun picturs has officially announced the inclusion of Vijay Sethupathi in their most important movie of the decade (after Enthiran). Yet to be named movie is having some interesting casting. The most important heroine role is yet to be announced, rumors say that it could be Trisha who could be pairing Rajni, but lets wait for that.

As of now its Vijay Sethupathi. Vijay has a strange coincidence of acting with both Rajinikanth and Chiranjeevi both superstars simultaneously. He is also playing an important role in Telugu , Tamil bilingual with Chiranjeevi in Sye raa Narasimha reddy 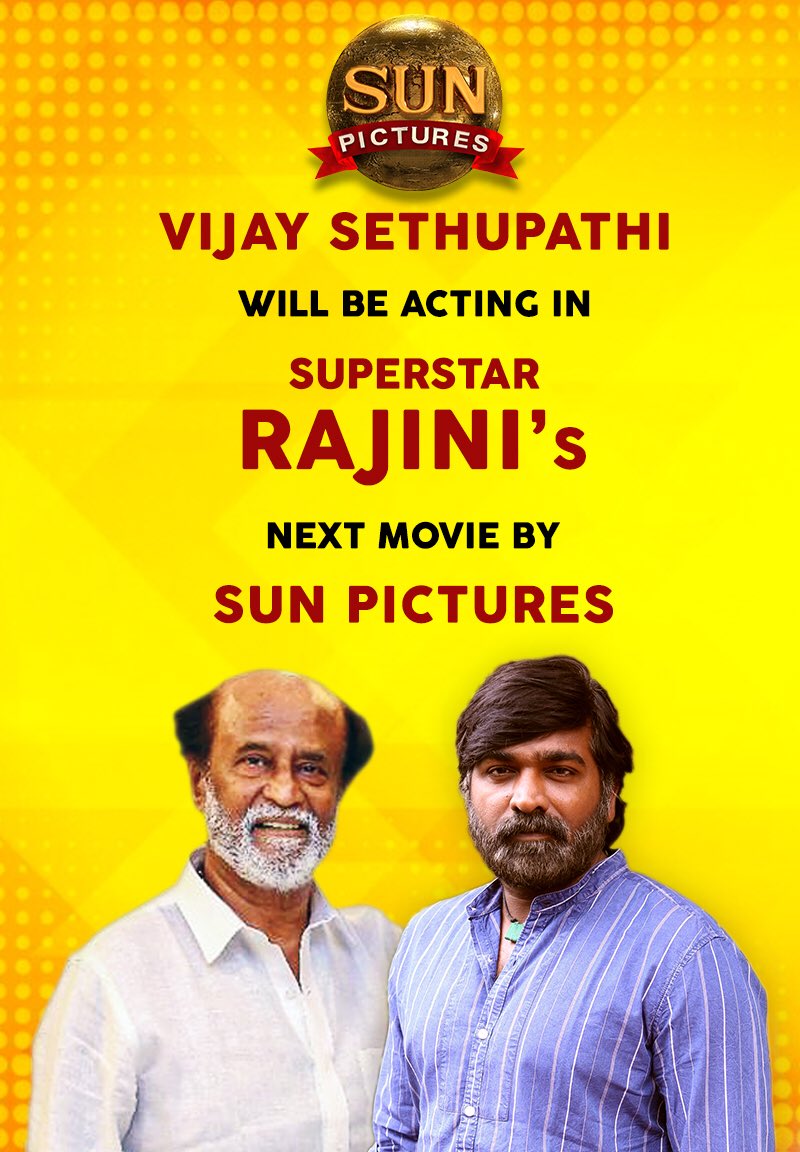