Top 24 Feel-Good Tamil Movies that you should not Miss

Tamil film industry is well-known to churn out feel-good movies that have enjoyable content, heartwarming stories, clean humour, good actors and excellent songs. Some feel-good Tamil movies have gone on to become superhits while some still stay underrated, though they have soul-stirring content. Tamil audience always love this genre and appreciate these movies.

The following is a list of feel-good Tamil movies that have been released since the year 2000.

This musical film had an engaging story as well as some good songs that are still in many listeners’ playlists. An aspiring music director is forced to sacrifice his love and his dreams, when his brother falls seriously ill. How he overcomes this and emerges successful forms the rest of the story. This movie had a realistic climax, but was changed to a happy ending later. Starring Ajith and Jyothika in the lead roles, this movie was directed by V.Z. Durai and had music by Deva.

With a soulful story and brilliant music, this movie was critically acclaimed as well as fared well in the box office. Though a love story was the central theme, the movie had other feel-good elements too. It had Arjun, Meena, Jyothika and Ramesh Arvind in the lead roles. Vasanth’s direction was widely appreciated. Songs by A.R. Rahman played a phenomenal part in the success of this film. This movie is worth your time and you can enjoy it with your family members.

Though this movie was a commercial blockbuster, it was critically acclaimed too. True friendship, family sentiments and rib-tickling comedy by Vadivelu contributed as the major factors for the movie’s success. Some interesting conflicts were also integrated in the movie. Vijay, Suriya and Ramesh Khanna played the protagonists, while Devayani and Vijayalakshmi played the female leads. Directed by acclaimed director Siddique, this movie had music by Maestro Ilaiyaraaja.

Friendship between a boy and a girl formed the central theme of the movie. Whether they end up together or part ways as friends was the entire story about. With a simple storyline, clean humour, and good performances, this movie scored well with youngsters of that generation. It makes for a good watch even now. It had Prashanth and Shalini playing the lead roles. Direction was by Kamal and music was composed by S.A. Rajkumar.

This highly critically-acclaimed movie received six National Film Awards and other prestigious awards for its direction, performances, story and music. Mani Ratnam integrated strong emotions of parental love which worked in the favour of the movie. Performances by Madhavan, Simran and P.S. Keerthana were widely appreciated. Music by A.R. Rahman was another highlight of the movie. Watch this heartmelting movie, if you are a fan of soulful stories. Don’t forget to keep some tissues handy. 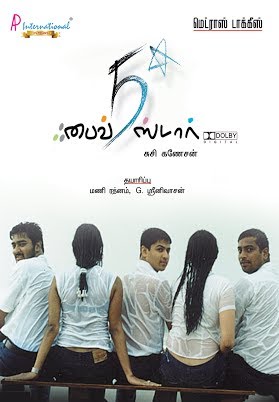 With friendship as its central theme, this movie had a compelling storyline and interesting twists. Five friends pass out of college with the promise of not losing touch with each other, but one of them runs away leaving behind his newly-wedded wife. Whether they find him or not forms the rest of the story. Susi Ganesan directed the movie and music was composed by Sriram Parasuram and Anuradha Sriram.

This film taught about life, love, finding joy in small things, and destiny. Kamal Hassan intelligently summed up the film’s storyline in a single line ‘The love which you have towards others and the heart which cries on seeing a stranger’s agony are the places where God resides’. Though the movie did not perform well at the box office during its release, it became a cult classic later. Directed by Sundar.C, this movie had Kamal Hassan, Madhavan and Kiran in the lead roles. Music was composed by Vidyasagar.

This delightful film won the Golden Lotus Award for Best Popular Film Providing Wholesome Entertainment. That itself tells the reason why the film finds a place in the feel-good category. With friendship, love, humour, social sentiments, heart-melting performances and good music, this movie catered to all kinds of audience. Directed by Cheran, this movie had Gopika, Sneha, Mallika and Kaniha playing the leads besides Cheran. Music by Bharadwaj was also highly appreciated.

This movie was director Radha Mohan’s debut movie, which incorporated love, friendship, dreams and comedy in equal dosage. Four men from different parts of Tamilnadu come together to make a movie. The lead character gets involved with a girl accidentally and his life turns into an emotional roller-coaster from then on. Starring Prasanna, Navya Nair and Prakash Raj in the lead roles, this feel-good movie had music by Ramesh Vinayagam.

Though the movie was underrated during those days, it was highly appreciated by critics and worked well with family audience. A young man and his father try to find the identity of the woman chosen as the bride for the man by his deceased mother. This simple storyline was filled with many interesting turns which made the movie an enjoyable watch. It was directed by Bhagyaraj. Dharan’s music was equally successful, with the song ‘Unnai Kandene’ breaking all records.

This was Radha Mohan’s biggest hit of his career. It can also be quoted as the best feel-good movie of the decade. Soul-stirring content, slapstick comedy, exhilarating performances and heartwarming music increased the movie’s likeability factor. A musician falls in love with a headstrong deaf-mute woman who eventually realizes his love after many hardships. All the songs by Vidyasagar turned out to be chartbusters. This movie is a definite watch, if you love uplifting stories.

A simple campus story which involved friendship, love, comedy and other sentiments. The movie’s drama-like format worked well with the audience. Though the tragic climax could have been avoided, this was a refreshing movie at a time when sloppy potboilers were being made. Directed by Balaji Sakthivel, this movie had Akhil and Tamannaah in the lead roles. Music was composed by Joshua Sridhar and the songs were chartbusters. 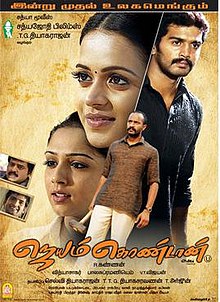 Though this movie revolved around step-sibling relationship, it had equal dosage of love, comedy and action in it. The overall feel of the movie was heart-touching. Vinay Rai, Bhavana and Lekha Washington played the lead roles. The movie was directed by Kannan and had music by Vidyasagar. It went on to become a superhit after receiving positive reviews from critics.

This was the first feel-good film by Gautham Vasudev Menon, which didn’t have romance as its central theme. Though love played a huge part towards the proceeding of the movie, the story focussed more on the dad-son relationship. It had a slow begin and gained publicity by word-of-mouth. Harris Jayaraj’s music also played a major part in the success of the movie. It had Suriya, Sameera Reddy and Divya Spandana in the lead roles.

Radha Mohan turned the Father of Feel-Good Movies with this poetic film. This movie focussed on the beautiful relationship between a father and a daughter. There was also equal amount of comedy in it which saved the film from turning preachy. Starring Prakash Raj, Trisha and Aishwarya in the lead roles, this movie too had music by Vidyasagar. Go for this, if you love good content with slapstick humour. 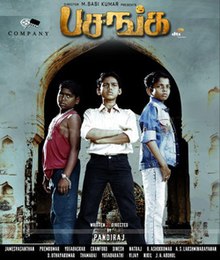 Directed by Pandiraj, this children movie had lots of takeaway. The story focussed on the enmity between two school students who eventually turn into friends after interesting sequences. The movie also had a romantic co-plot which provided some relief at intervals. Kishore, Sree Ram, Vimal and Vega played the lead roles in this film. An enjoyable movie which can be watched along with family members. 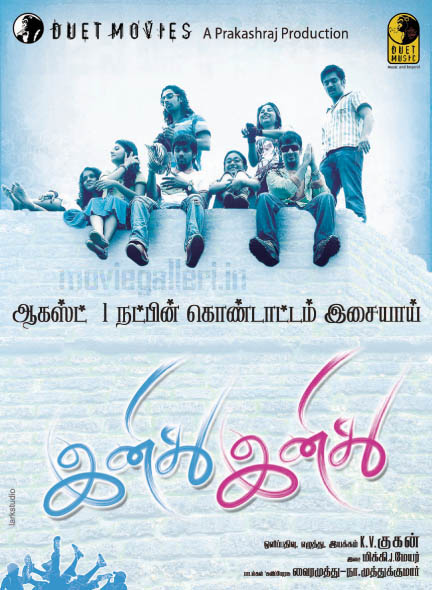 Remake of the highly successful Telugu movie Happy Days, this campus story had all the feel-good elements in it – friendship, comedy, love, infatuation and dreams. Though it did not match up to the original, it can be watched as a standalone movie. This remake was directed by K.V. Guhan and had music by Mickey J. Meyer. It had Adith Arun, Reshmi Menon, and Narayan Lucky in the lead roles.

A mentally disabled man fights for the custody of his daughter, thereby teaching his opposing lawyer the value of father’s love. This movie turned into a tear-jerker when it was released. Lead actor Vikram won many awards for his excellent performance. Anushka Shetty, Sara Arjun and Amala Paul starred alongside him. Directed by A.L. Vijay, this movie had soul-stirring music by G.V. Prakash Kumar.

Remake of the Bollywood superhit 3 Idiots, this campus movie turned into a blockbuster in Tamil too. Starring Vijay, Madhavan and Srikanth in the lead roles, this movie focussed on the friendship between them and exposed the faults with the prevailing education system in India. This movie was directed by Shankar and the music was composed by Harris Jayaraj. Comedy was also a major contributing factor for the movie’s success. 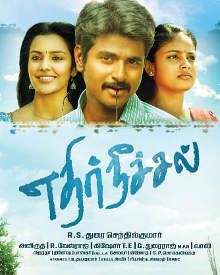 Directed by R.S. Durai Senthilkumar, this movie focussed on the life of a carefree guy who turns into a successful athlete towards the end of the movie. Since the movie had all the feel-good elements like comedy, love, friendship, hardships and dreams, it turned into a superhit and a must-watch for all ambitious persons. Music was composed by Anirudh Ravichander and it had Siva Karthikeyan, Priya Anand and Nandhita Shwetha in the lead roles.

After a long gap, a complete fun-filled movie was released in Kollywood. This movie focussed on the deep friendship between three childhood friends. Comedy by Santhanam was widely appreciated. Along with Santhanam, Jiiva, Vinay Rai, Trisha and Andrea Jeremiah starred in the movie. Directed by I. Ahmed, this movie had music by Harris Jayaraj. Though a women-centric movie, this movie ranked high in all feel-good factors. It was the comeback movie of actor Jyothika and she delivered a stellar performance. Rahman acted as the male lead. The movie worked well due to its highly motivational content. Directed by Roshan Andrews, this is the perfect movie to watch along with family members and loved ones alike.

Though the movie implied love in its title, it was far from being a love story. A small town girl comes to Chennai in search of a job and gets involved with her gangster neighbour. What follows is an interesting comedy sequence that leads to a beautiful realization between the lead pair. Directed by Nalan Kumarasamy, this movie had music by Santhosh Narayanan. Vijay Sethupathi and Madonna Sebastian were cast in the lead roles. This was the most underrated movie of 2017, despite receiving positive reviews from critics. Directed by Radha Mohan, this movie had Arulnithi, Vivek and Tanya Ravichandran in the lead roles. An unlikely friendship brews between a deaf-mute man in Ooty and actor Vivek who has come there on a vacation. Music was composed by Vishal Chandrasekhar. Watch this, if you are desperately hoping to watch a new-age feel-good movie.